We usually sit in the pew in the back of the church. God doesn’t mind if you sit in the back as long as you show up for the part before communion. If you’re late, sit in the back on the right so as to not upset Father Tom. After communion you can take your wafer, genuflect to the God Box, and walk straight out the door because you got your weekly allocated God Nutrition Wafer.  That’s the bit God cares about the most because God is a strict foodie. No, seriously if you read the bible, a large portion of it is what you should or should not eat. (You have to thumb through the parts about the names of people who are related to other people. That was a wedding guest list. Your name isn’t on there. Mine isn’t either, I checked.)

We always leave just after communion. “It’s just the announcements,” Mom explains. Nothing important, nothing that is going to change what God said or how we’re supposed to live our lives. Plus it means we can beat the crowd out of the parking lot. 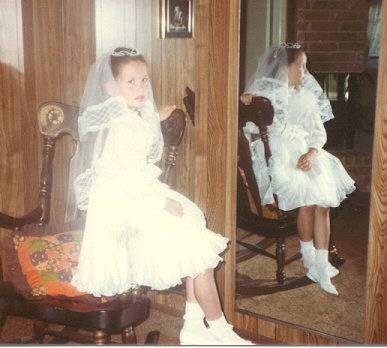 My feet don’t touch the floor yet but I get in trouble for putting the kneeling bench down because you’re not supposed to put salt water sandals on it. Or maybe I get in trouble because I can never figure out if the kneeling bar should be down or up and I’m always trying to figure out how the hinges work. There’s an arm on both sides but it doesn’t completely collapse when it’s in the “away” position and it doesn’t completely lay flat in the “down” position. It’s much more interesting than the talk from Father Tom.

I don’t like to look Father Tom in the eyes when he’s talking on the pulpit. He looks at me and I can feel God’s disappointment. I’m a sinner. I snuck a peanut butter Little Debbie and a scoop of ice-cream when Mom asked me to serve desert last night. I know God is angry at me for this because it was the same confession I had three weeks ago at my last confessional. God doesn’t like it when you don’t learn from your mistakes. It’s not like those Hail Marys get you out of anything. I mean they get you out of hell, but not out of doing it again. That’s what my CES teacher said.

Since I can’t examine the kneeling bench, I look for other children to analyze. A few kids go to my elementary school. One of them goes to my CES class on Wednesday night. I don’t know her very well, though. She picks her nose as I stare at her and wonder how long her Dad will let her do this without smacking away her hand. I can hear my dad’s classic saying, “You can pick your friends and you can pick your nose but you can’t pick your friend’s nose.” I laugh out loud a little bit and my mom shushes me.

My sister is on the other side of Mom. We’re not allowed to sit together because we end up fighting. Father Tom is talking about something and quotes a bible verse about respecting your parents. I catch the end of it because Mom is looking at me with those, “You better be listening” eyes. I try to listen so she won’t lean over and whisper in my ear. I think she just had coffee, even though it is Saturday night, and I don’t want to breathe that warm, hour-old coffee smell.

Saturday night mass is completely legal. God sleeps in on Sunday so he doesn’t mind if you show up for Saturday’s service. He prefers it. I was told he’s almost always late to mass on Sunday morning and usually arrives late enough to sit in the back and take communion but leaves before the announcements. He hates crowded parking lots, too.