I’ve been trying to teach LB not to steal things. There is a fine line between looking at something and being tackled by security guards. The line is called THE DOOR and this concept is lost on my two year old.

LB loves to manhandle things. Toys. Books. Radios. Glasses. Still, at over two now, she has the grip of a Banshy and yells, “MINE MINE!” and strikes out for whatever fancies her attention at the time. More than once, this has been another buddy at the Paul Frank store. Buddy, I can understand, but a woman’s thong? Lotion? A watch? Seems my little kleptomaniac progressed up the money scale and will probably be heading right for the big jewels or important paintings next. I thought it was time to stop the inevitable. 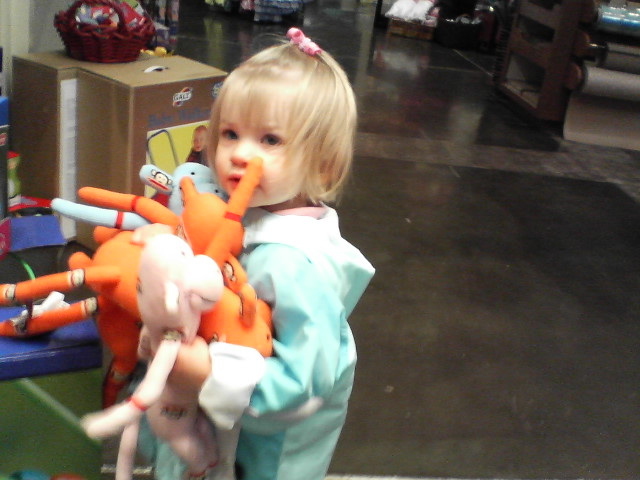 I’ve been explaining to LB how we can look and not touch. Or how when we decide to pick it up and look, we need to put it back. She’s getting better. The trains in Borders (mostly) tend to stay on the table when she’s done playing and the books (almost) always get put back. Luckily I’ve caught all items before she actually smuggled them out the door. 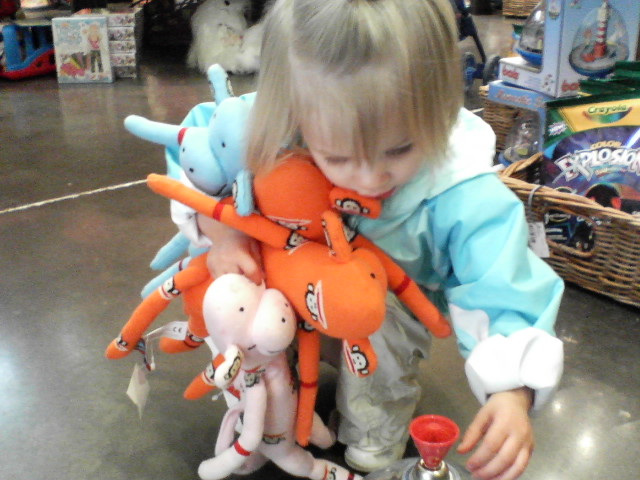 It shouldn’t shock me, then, when we went to our friend’s house last week that she attached herself to a purple letter “O”. The kid loves the letter “O”. Also? “X” is a top fave. (Think tick-tac-toe at the park and you’ll see why she insists on having the “X” and “O”.) She carried around the purple “O” the entire visit.  At last it was time to go and I reiterated the “put away everything you got out” rule that applies everywhere we go. I continued to talk while shoving things back in our bag and telling LB to “go put that back, Sweetie.” At some point, LB must’ve handed me the purple “O” when I told her to go put it back. I was unaware of the exchange. Apparently, I slapped it in the bag along with all our other crap. 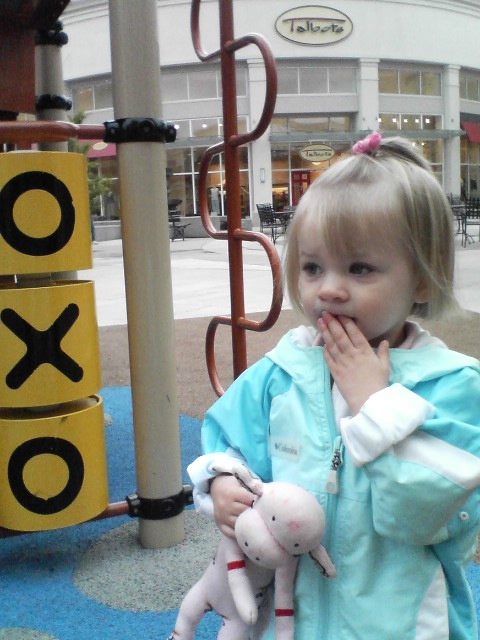 The ironic part about is that our friend, the one whom my daughter and I just stole a purple “O” from, would actually MAIL us a bib if we left it there. She would make a special trip to hand us SOAP (this really happened once) if we forgot it in the shower. She would not let one thing be left behind on accident and I’m sure she’d mail something she and her son accidentally took as theirs.

The thing is? I can’t remember to mail my Christmas Cards, let alone a purple “O”. We still have toys from playgroup people left when she was six months old and a block from a friend we went walking with once a week a long while back. We no longer see these people and I completely forgot to give them back their stuff when we did see them. So the reality is, I think we stole a purple “O” among many other toys throughout the Northwest.

I am such a great role model.