Welcome aboard Flinger Flight 666. Next destination: Hell.
We’re proud to serve you goldfish and fruitsnacks for your inflight meal. Your movie will be “Elmo’s Potty Time” on a loop. You’re aboard a special flight filled with a scientific experiment where your children have been sleep deprived and starved and are needing your attention.
In case of an emergency, there are no exists.
Thank you for choosing Flinger Airlines.

We were going along just splendidly, or rather as splendidly as one with a new baby could possibly be going along, when BLAMO! The ‘flux hit the house. LB had the flux. We weren’t aware that’s what was going on until well in to my “I hate being a mom OHMYHELL what did we do?!” phase. Once she got on Zantac, life became bearable. A few months later, she started sleeping and a few months after that I uttered the words “Number Two.” And now, here we are. History has a way of repeating itself.

We went to the doctor for Baby O today because this time around we know all the signs. The violent spit-up that comes out his nose. The screaching when he eats. The painful look he gives as he’s eating and pulls away from the food distressed and still starving. And of course, the not sleeping. The Not Sleeping. That’s the symptom we call the doctor for.

Three days ago I wrote a letter to some friends gushing about how much I loved having two kids. “Sure life is hectic and crazy, but I love it! I love that I have children.” When my BFF saw me the next day she said, “So, what were you on when you wrote that?” Then she laughed uncontrollably while repeating my mushy mom sentiments. Apparently, I haven’t gushed much.

Now I remember why the baby stage was so difficult for us. Flux makes you a little wacky. Scratch that.. flux indirectly makes you a little wacky. The not sleeping?  A type of torture used by the military. But still, in the midsts of all that is hell, the last four nights of utter screeching and arguing, amidst the daily tantrums and not napping, amidst all of this, for one tiny moment, a picture was taken.  .....  And this reminds me that in the end, I’m their Mom. And I love it. 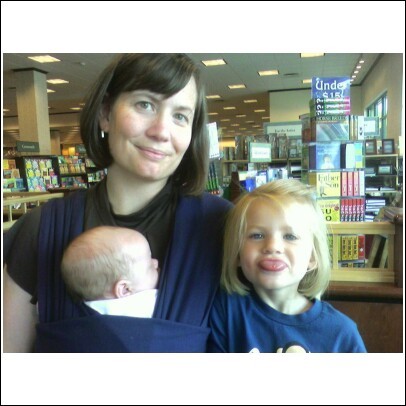